There are many species of clown fish in the world, the best known of which is <em> Amphiprion ocellaris </em>, which is the species of Nemo. Among these species, fish can have varied colors and streak patterns. Clown fish live in groups in the middle of anemones. Anemones are invertebrates that release highly toxic substances for fish and crustaceans. However, there are at least 10 species of anemones whose toxins do not affect clown fish, as they have a layer of mucus that protects them. These fish have an exchange relationship with anemones. They live among them, where they are protected from predators, while anemones feed on the remains of food left by clown fish.

In a natural environment they feed on zooplankton, small crustaceans (copepods) and algae. At the São Paulo Aquarium, in turn, they consume food for omnivores and brine shrimp.

It can be found in the Indian and Western Pacific Oceans. 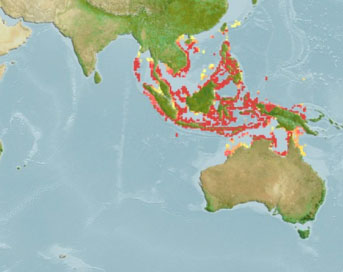 None of the 5 species of clown fish present in the São Paulo Aquarium have their conservation status defined and, therefore, cannot be considered threatened with extinction. Despite this, they are constantly threatened by over-exploitation and habitat destruction.

They inhabit coral reefs at depths of up to 15m.

They are oviparous animals. Clownfish couples spend their lives together, living in the same anemone. All clown fish are born male, but when a female in the group dies, they may eventually change sex. To ensure the preservation of the species, the glands in the fishs body start to work differently and the animal changes sex. When this happens, the female comes to dominate a group of males.