The green moray eel is found in waters shallower than 30 m in depth. Throughout his life, his color changes and changes from black in juveniles to dark green in adults. They are nocturnal predators with strong teeth. They feed actively, when they enter small crevices and caves to hunt for fish and other organisms that are hiding. Part of the morays reputation as being wicked animals is due to the fact that they usually open and close their mouths, showing their sharp teeth. Although this behavior seems threatening, the moray eel does it to breathe.

In a natural environment it consumes fish, crabs, shrimp, octopuses and squid. And at the São Paulo Aquarium, fish, crustaceans and squid.

Inhabits the Atlantic Ocean, from the USA to Brazil. An individual has already been found on the west coast of North Africa. 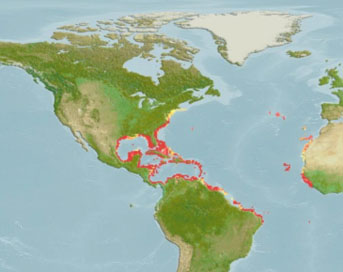 Green moray ewes are currently not considered to be threatened with extinction, and have not suffered major threats.

This species migrates to specific breeding points, where external fertilization occurs. There, millions of eggs are released into the environment, but only a few are fertilized and even fewer reach adulthood.