The mere are opportunistic predators that, despite having teeth, swallow their prey whole. It is a solitary species that presents little movement between reefs, thus presenting a restricted territory.

In a natural environment it feeds on several species of fish and invertebrates, such as lobsters and octopuses. They can even eat juvenile sea turtles, catfish and rays. At the São Paulo Aquarium they consume fish, shrimp, shellfish and clams. 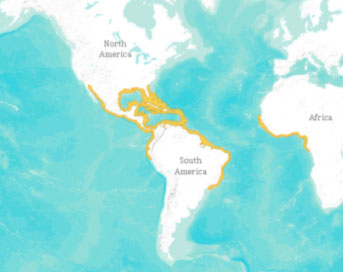 The mere are critically endangered and are very vulnerable to overfishing and habitat destruction. This threat becomes even more serious when we consider its slow growth rate and late sexual maturity.

The mere can be found in shallow coastal areas, especially on coral or rocky bottoms and with cloudy water, as in mangroves and rocky shores.

They are oviparous animals that aggregate in groups of 100 or more individuals for reproduction. Aggregations take a few weeks a year, peaking between July and September.