The otter is a semi-aquatic mammal, with twilight or nocturnal habit, that inhabits rivers and lakes with a lot of vegetation on the banks. Generally, the burrows of this species are located in natural holes located along the banks of the rivers, or still, holes dug in clay ravines. They present different vocalizations and forms of territorial demarcation using feces, urine or secretion from anal glands. The demarcation of the territory has as main objective to indicate to other otters that the existing resources in the area are already used by other individuals. It has an elongated body, short legs with interdigital membranes, a long tail and adapted for propulsion in the water. They can stay up to 6 minutes submerged and swim at a speed of 12km / h. They have a keen sense of smell and hearing, as well as vibrissae, which are important tactile organs that assist in the detection of fish. Its coat is short and dense, conserving the animals heat, forming air bubbles inside it and reducing the heat loss to the water.

Little is known about longevity, so far, the record of the greatest age reached by an otter was 14.9 years.

In a natural environment it feeds mainly on fish, crustaceans and molluscs, but because they are opportunistic predators, their diet varies with the availability of prey and habitat, so they can also feed on insects, reptiles, birds and even small mammals. At the São Paulo Aquarium, in turn, they consume a variety of fish (such as tilapia, pacu, piau and catfish), in addition to chicken and meat.

It occurs from Mexico to the north of Argentina. 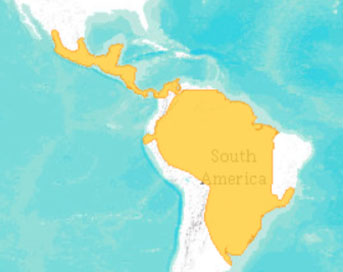 The species was intensely hunted for the trade of its fur. Today the main threat that it suffers is the hunting caused by human conflicts, especially with fishermen. This, combined with habitat destruction and water pollution, seriously threatens their populations.

They inhabit regions close to rivers and lakes with rich riparian vegetation.

The otter is a solitary animal, so a male only joins the female in reproductive seasons. The female is solely responsible for maternal care and, as a result, social groups made up of an adult female and young puppies can be seen at certain times of the year. Gestation is approximately 56 days with the birth of 1 to 5 puppies.