At the São Paulo Aquarium you can meet Aurora and Peregrino, a couple of polar bears. Pilgrim is a male who was born in a Russian zoo, to parents also born in a zoo. Aurora, on the other hand, was born in a free life, but her mother was hunted, leaving her an orphan along with her sister. Because polar bears depend on their mother in the first years of life, Aurora and her sister would not survive in the wild and that is why they were taken to a Russian zoo in order to receive all the care and attention that puppies need in the first years of life. After growing up a little, Aurora and Peregrino met and today they are at the São Paulo Aquarium for a Conservation Project that involves increasing knowledge about the biology of the species, its reproduction and a strong work of environmental education about how our attitudes today and here affect global warming around the world.

They are usually solitary, being more common to see groups in the reproductive season, where only one couple is found, or during the raising of the young, in which the female with her young is seen. Polar bears are excellent swimmers and can stay for long periods in this environment to hunt and get around.

The polar bears main prey is the ringed seal (<em> Pusa hispida </em>), but it can also feed on other marine mammals, such as whales and walruses, in addition to sea birds and fish. Ice is very important for the polar bears hunting strategy, so - during the summer - when the ice retracts, some bears follow the ice, traveling hundreds of kilometers, to maintain their main food source. Bears that stay on land during the summer are isolated until the ice returns (only in the fall). On land, the bear faces lean periods - they rarely manage to hunt seals in the open sea, without the ice. Despite this preference for the ringed seal, at the São Paulo Aquarium, polar bears feed on a variety of items, such as pork, beef, poultry and fish. In addition, items such as honey, watermelon, carrots and some leaves are used as food enrichment for animals.

up to 3 meters in length (standing).

The polar bear is found in the Arctic Circle and in adjacent continental areas. The distribution area includes territories in five countries: Denmark (Greenland), Norway (Svalbard), Russia, United States (Alaska and Canada). The southern limits of its distribution are determined by the annual disposition of floating ice and permanent ice during the winter. 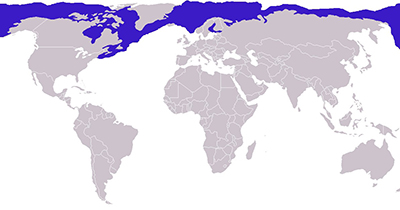 Climate change caused by human action is damaging habitats, people and animals, such as the polar bear. This animal is one of the symbols of this damage, as it is one of the species that is suffering the most from these changes in the climate. Their populations are decreasing a lot and if nothing is done, two thirds of the polar bear population will be extinct by 2050. However, this situation is not yet irreversible, and if people change their habits, the situation may change.

Its preferred habitat is regions with sea ice in the Arctic.

Between November and January, mothers give birth in burrows dug in the ice. After feeding heavily between April and May, the females that mated dig a hole in late October and early November. The puppies are born similar to white mice, with 30 to 35 cm, and weighing just over half a kilo. They are born blind, toothless and covered with short hair, and are completely dependent on their mothers for food and warmth. The mother with her cubs leave the den between March and April. While in the den, the mother does not eat, drink or defecate. The chicks grow quickly, thanks to the calories from their mothers rich milk, which has about 31% fat. The puppies stay with their mothers until about 2.5 years of age. Despite this, they only reach maturity between 5 and 6 years.