They are solitary, territorial and relatively sedentary animals. These fish have a protruding lower jaw, which is used to catch their prey. They vary in color, which is evident in the reproductive season.

In a natural environment, your diet consists of octopuses, crabs and fish. At the São Paulo Aquarium they consume fish, shrimp, shellfish and clams.

It occurs in the Atlantic and Indian Oceans. 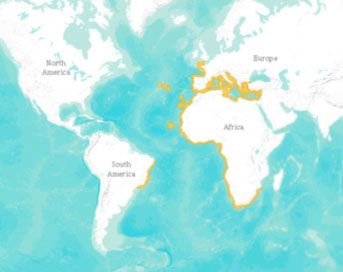 The main threat to this species is overexploitation for commercial fishing. The slow growth rate and the complex reproduction of groupers contribute to the lack of ability that this species has to sustain itself with the pressure of fishing.

They inhabit coastal regions with rocky bottoms, being able to enter brackish environments.

Groupers are oviparous, and protogenic hermaphrodites, which means that they initially live as females, but develop as males as they grow. The sexual maturity of females is reached at around 5 years of age, and the transformation into a male occurs between 9 and 16 years of age.