The nurse shark, is a shark that spends a good part of the time stopped due to its ability to pump water through its gills to breathe. Thus, it increases its activity only at night when it is looking for some prey to feed. In order to locate their prey, in addition to using tools such as the lateral line, smell and Lorenzini ampoules, sandpaper sharks have two barbels close to the mouth that feel the vibration and movements of prey that bury themselves in the sand at the bottom of the seas.

In the natural environment they consume a wide variety of small fish, molluscs and crustaceans. At the São Paulo Aquarium, fish such as: Sardines, Trilha, Bicuda, Agulhinha, Hake, among others and also squid, octopus, shrimp and seafood are offered 3 times a week.

In tropical and subtropical waters of the Atlantic Ocean. 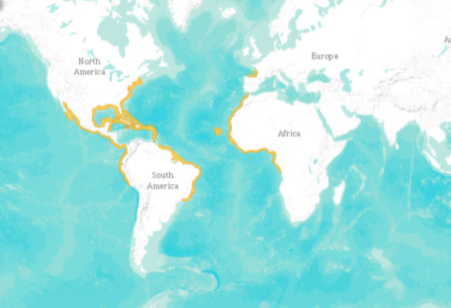 The threat status of sandpaper sharks in the wild is not yet well known, as the species has not yet been fully evaluated, and for this reason they are considered by IUCN (International Union for the Conservation of Nature) as Insufficient Data. Despite this, in Brazil the species is considered Vulnerable by ICMBio (Chico Mendes Institute for Biodiversity Conservation), being extinct in some locations such as in the state of Rio de Janeiro. This vulnerability is due to fishing and habitat destruction, especially in the reef areas, his favorite habitat.

They inhabit tropical and subtropical coastal waters at depths of up to 130m. They are usually found in groups resting on coral reefs and rocky reefs, but they are also found in mangroves and sandbanks.

The sexual maturity of males occurs when the animal reaches between 2.10 and 2.14 m in length; while for females it occurs between 2.23 and 2.31 m. This suggests that maturity is reached between 10 and 15 years for males and 15 to 20 years for females. During gestation, which lasts about 5 to 6 months, the chicks develop inside eggs in the females two uterine cavities. After a few months these eggs hatch, the empty egg capsules are expelled and the development continues inside the uterine cavities. When they reach 27 to 30 cm in length, the mother gives birth to up to 34 puppies. Reproduction occurs every 2 years.