Some bats that live in the Aquarium today were transferred from the Temaikén Zoo in Argentina. The others had their origin within our institution, through the reproduction of the first animals. A reproduction of this species inside the Aquarium is another indicator that the animals are in good levels of animal welfare.

He lives in flocks that can reach thousands of individuals. The group has a hierarchy, where the dominant males occupy the best branches of the trees. Do not use echolocation, guided only by a well-developed vision. To get food they can fly up to 50km in one night.

In a natural environment they feed on fruits and nectar. At the São Paulo Aquarium they mainly consume a variety of fruits. 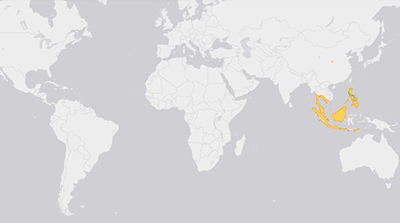 This species is mainly affected by hunting, but also by habitat loss. Because flying foxes are seed dispersers and pollinators of native trees, the decline of this species impacts several others.

Flying foxes are found in rainforests and swamps.

The breeding period varies by location. Despite this, males usually protect their harem from females, preventing other males from approaching. Females usually have one puppy a year, which is born with eyes open and fully formed.