Thunder was found on a beach in Rio de Janeiro, where he took a break after a long trip. However, because he was very weak and on an inhabited beach, he was transferred to Rio Zoo in order to better serve the animal, where he stayed until he was 100% recovered. As Brazil is a signatory country to the Antarctic Treaty, any Antarctic or Sub-Antarctic animal that is removed from the beach, cannot be returned to nature. This occurs as a precaution, as the animal may have come into contact with pathogens that it has never known and thus, when returning to its natural environment, it could expose other individuals to these pathogens. Thus, Thunder was transferred to the Aquarium and today it helps us to teach everyone that we should not touch the animals that arrive on the beaches, but rather respect their space and call the competent authorities.

The subantarctic fur seal has a different coloration between the snout and the pectoral region, more evident in males. Because they are animals with limited terrestrial mobility, they choose islands with few or no predators to mate and have their young.

Unknown, being suggested between 15 and 19 years old.

It is highly distributed in the southern hemisphere, occurring in the Southern Atlantic, Indian and Pacific Oceans. 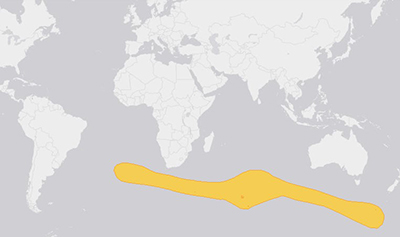 This species was hunted a lot in the past, and it almost became extinct at the beginning of the 20th century. Currently, the population is recovering and resuming its natural territory. The current threats are related to limited access to food and global warming (which also affects the distribution of prey).

Males spend the winter season in the middle of the sea, arriving at the coast in the spring to breed. In summer, females spend about 6 to 10 days at sea looking for food for their young, and in winter they increase to about 23 to 28 days. They prefer rocky beaches with abundant stones and shade.

They are polygamous, they have mating harems. Males defend their territories which may have 6 and 20 females. Males have been competing for land territory since October and continue until they have copulated with their entire harem.