Matias is a very special southern fur seal. Matias ran aground on a beach in southern Brazil, when the fauna rescue and rehabilitation team arrived at the site, they noticed that the individual was still young, approximately eleven months old and had a visual impairment. Due to this deficiency, Matias was referred to the R3 rehabilitation center in Florianópolis to assess the possibility of release. Unfortunately, they noticed that the visual impairment affected their basic activities and the release could plague the animal to predation or increase the difficulties in finding food. It was then that the São Paulo Aquarium received this little wolf to cheer and sensitize the public that visits him about how the environment being poorly cared for, is affecting the health of the animals that live in it. Joca is a young southern fur seal (Arctocephalus australis) that was rescued by the PMP-BS (Santos Basin Beach Monitoring Program) in the municipality of Lagunas-SC. He was found to be in poor health. The animal was sent to the R3 Animal Association, where it received several treatments to rehabilitate it. However, although the treatment allowed to improve its general health, the animal was unable to recover from visual impairment. In this way, Joca could no longer be reintroduced into his natural habitat, as his abilities to swim, hunt and escape from predators were greatly reduced with this deficiency and, since this dear animal deserved a second chance, he was sent to São Paulo, where he receives special care both for his growth, since he is a juvenile, as well as for his visual impairment.

They are social and live together in colonies along the coast. They usually fish in groups. They spend most of their time swimming, but during the breeding season they spend the day on land. They have long front fins to help them move around the rocky shores. To communicate, they use vocal noises, and the mother and her baby have a special individual call for each pair. Studies indicate that puppies only recognize their mothers voice.

Little is known about the longevity of this species, being able to be between 12 and 30 years.

In a natural environment it consumes fish, shrimp, lobster, squid and krill. At the São Paulo Aquarium, he mainly consumes a variety of fish.

They are distributed along the South American coast (Peru, Argentina, Uruguay, Chile and Brazil). 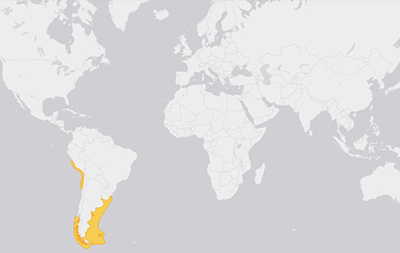 Perus industrial fisheries threaten the food resources of this species. In addition to the threat of food limitation, South American fur seals are threatened by accidental capture and other interactions with fishing.

They spend their time both on land and in the ocean. During breeding periods, they spend the day on the coasts of Peru, Argentina, Uruguay and the Falkland Islands. On land, they prefer rocky areas to protect them from the sun, being able to move easily on land and climb steep slopes. When they are not in breeding season they are usually in the ocean.