Eto, Muni and Kamá are three males of the colobus species that came to the Aquarium transferred from a Zoo in Germany. In addition to habitat loss, this species is widely hunted for the beauty of its fur. Thus, colobus help us to convey the message that we must all be responsible consumers who do not buy and denounce the sale of illegal products that use animals.

They are diurnal. They spend much of the day resting in the treetops. They live in social groups of 3 to 15 individuals. These groups typically include a dominant male, some females and their young. The Colobus has only four fingers on each hand. The lack of a thumb can be an adaptation for rapid movement between trees. The name Colobus derives from the word <em> kolobus </em> which in Greek means "mutilated", a reference to the lack of thumbs.

In the natural environment they feed primarily on leaves, but also on fruits and flowers. At the São Paulo Aquarium they receive leaves and vegetables.

It occupies the region of Equatorial Africa. 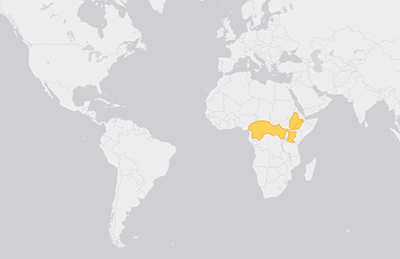 They are threatened by habitat loss due to deforestation for logging and plantation transformation. In addition to these threats, they are also hunted for the use of their skins.

After a gestation period of approximately 6 months, the puppies are born with pink skin and white hair. They begin to acquire the coloring of adults at 3 or 4 months. Females remain in their home group, but males when they reach adulthood must leave the group.