The rays have a special morphological adaptation, their bodies are flattened back favoring swimming at the bottom of rivers and seas. The nail rays, <em> Hypanus americanus </em>, are usually buried leaving only the eyes exposed, but when they feel threatened they can use their stinger located at the base of the tail to defend themselves.

They are opportunistic animals that forage the seabed continuously, feeding mainly on invertebrates that live on the bottom or buried, such as crustaceans, and bony bottom fish. At the São Paulo Aquarium, various types of fish, squid, shrimp and seafood are offered daily.

Across the western coast of the Atlantic Ocean. 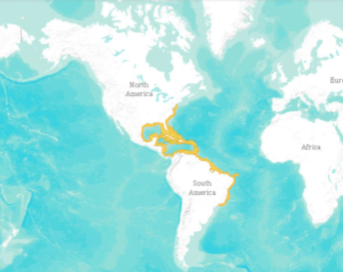 These animals are accidentally caught in the waiting nets, and as they are not of interest for food consumption, they are discarded at sea.

They inhabit sandy bottoms, lagoons, reef environments and beds of sea grass. They are often seen in bays and estuaries.

They are ovoviviparous animals and have a period between 4.5 and 9 months of gestation, where 2 to 10 pups are born. Reproduction can happen up to twice a year.