The Amy snake is a reticulated python that was unexpectedly found in a nursery. The animal most likely escaped from the house where he lived and invaded the nursery. At this time, she was transferred to the Butantã Institute and then to the São Paulo Aquarium. The history of this animal allows us to approach the problem of having wild animals at home, without having real conditions to keep them.

Its size has already secured a place in the Book of Records as the longest snake in the world. They are aggressive animals and use boats when they are threatened. They are opportunistic predators, approach the prey very slowly or surprise them by ambushing them with a well-aimed boat. Because they are excellent swimmers, they have been seen swimming in the ocean. Thats probably how they got to the islands in the Pacific Ocean.

In the natural environment it feeds on terrestrial vertebrates, such as wild pigs, bats, and deer. At the São Paulo Aquarium, in turn, rabbits, ducks and geese.

Southeast Asia and some Pacific islands. 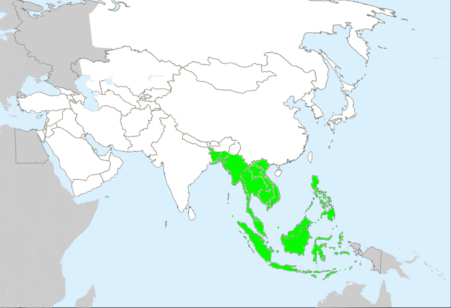 Due to the beauty and the designs of their skin, these animals are hunted for trade for tannery. Another problem is the suppression of the natural habitat.

The animals become sexually mature at about 4 years of age. Males use vibrations as a sign of their reproductive status for females. After copulation, females are able to store sperm for a later date, in which the climatic conditions are suitable for the development of the young. During the spring and summer, mating, laying and incubation of 25 to 50 eggs in a single laying takes place. During the 70 days of incubation, the female prepares a nest and remains curled over the eggs and through muscle contractions (tremors) produces heat to maintain the temperature of the eggs.