The Said snake, an albino Burmese python, was transferred from a CETAS in northern Brazil. Their presence at the Aquarium helps us to raise public awareness about how animals can be hunted to create products for our consumption, such as bags and wallets made with the skin of some snakes.

This snake has a very attractive skin color pattern, a fact that leaves it susceptible to hunting for the fur trade. Females are larger than males and are constricting snakes, that is, they capture and kill their prey using their body muscles until they strangle and asphyxiate them.

In a natural environment, their diet consists of small mammals, preferably rodents, birds, reptiles and amphibians. At the São Paulo Aquarium, their food consists of rabbits, quails and guinea pigs that are offered every 30 days. 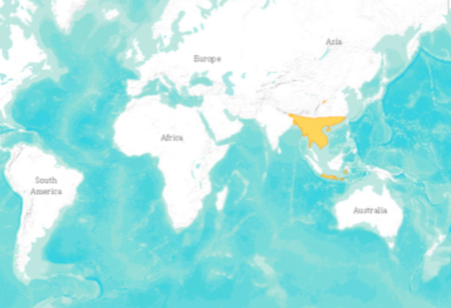 This species is threatened due to illegal trafficking, its population decreases even more due to hunting for consumption of skin and meat and the degradation of its habitat.

Found mainly in forests, including mangroves and tropical forests.

They are sexually mature between 2 and 3 years old. The females lay up to 100 eggs in each laying, the gestation lasts up to 4 months and the incubation phase approximately 2 months. During this period, the female prepares a nest and remains curled over the eggs and through muscle contractions (tremors) it produces heat to maintain the temperature of the eggs.